Major Accident was originally formed in late 1977 in Darlington.[2] Their first studio recording came in the early 1980s, when they recorded a single called Terrorist Gang with the B-side "Self Appointed Hero", and an early version of Massacred Melodies, which the band re-recorded in 1981 - this became their first LP. They planned to release "Warboots" from this session and got as far as test pressings before being signed by Step Forward records, home of Chelsea, Sham 69 and the Cortinas amongst others.

The band released their first single, "Mr Nobody", with Step-Forward Records before the release of their first studio LP. A UK tour supporting Chelsea helped promote the release of the record. They had UK Independent Chart hits with singles "Fight To Win" (no. 24) and "Leaders of Tomorrow" (no. 19, featuring drummer Evo, formerly from Angelic Upstarts The Blood who went on to form thrash metal band Warfare),[2] followed by "Respectable" (featuring "The Big G" - Garteh Jones on drums) all released on the Flicknife Records label, as was the LP A Clockwork Legion, by which time the band's name had been shortened to "Accident". A live album, Tortured Tunes – the Official Bootleg, was released in 1984, reaching no. 24 on the Uk Independent Chart.[2] Around this time the band appeared on BBC2 playing three songs live.[3] American label Toxic Shock released a follow-up album ...Crazy! in 1985, just before the band split up.[1][4][5][6]

Major Accident re-formed in 1996, once again using the full name rather than just "Accident". The re-formation was accompanied by a new studio album, The Ultimate High, released on We Bite Records, with a seven-inch single, Representation Not Reality, which was released in 1999 on Upstart Productions. The band's final release was a split album with Welsh street punks Foreign Legion entitled Cry Of Legion.[1][4][6][7][8]

Live performances followed, including a night at New York's CBGB in 2001 with a "clockwork punk" theme.[9] The band's activity was sharply curtailed when drummer Laze was involved in a motorcycle accident. The band currently plays just two or three concerts each year. 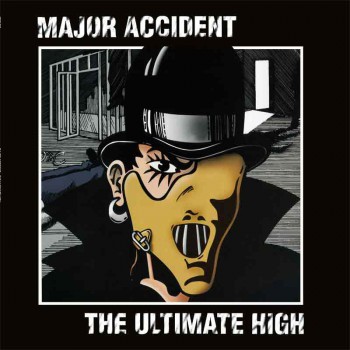 The 1996 album,first time repressed. Major Accident was originally formed in...

The 1996 album,first time repressed. Major Accident was originally formed in...