We use cookies to personalize content and ads to offer features for social media and analyze the hits on our website. We also provide information about your use of our website to our partner for social media, advertising and analysis continues.
AcceptDetailed Information

Get your boots & braces together - it's time to moonstomp once again with Symarip's Monty Neysmith!  A new year brings a fresh new project from Symarip's singer/songwriter/organist Monty Meysmith, who is backed once again by American traditionalists The Bishops (Omaha, NB). The lead off 7" single will be released March 2017 on JUMP UP (USA) and MAD BUTCHER (Germany), featuring two brilliant reworkings of Symarip classics co-written by Neysmith, "Fung Shu" and "Skin Flint". A full length album "Monty Neysmith meets The Bishops" will be released in late May, debuting at the massive Supernova Ska Festival in Virginia.  The partnership started at the end of 2014 when Monty Neysmith was booked for a Jamaican Oldies show at Mayne Stage Chicago, for that gig JUMP UP label head Chuck Wren called on The Bishops to master the SYMARIP songbook plus some of Monty’s modern moonstomp classics. Studio time was booked at Legendary Studios, run by Mike Corcoran of Deal’s Gone Bad. They decided to re-record two Monty classics from the new millennium in a more "vintage" style: “JUMP” is a midtempo ska groover with great horn hooks and soulful vocals, the flip "Laurels for Laurel" is a tribute to the Laurel Aitken, thanking the "Godfather of Ska" for taking a chance on a young group called THE BEES – who would eventually morph into the mighty SYMARIP. The 7" single sold extremely well, which lead to a one-off 7" single collaboration with the Soul Radics later that year. Both 7" singles on JUMP UP plus appearances on the label's PRESSURE DRIP sampler (CD/Tape) re-introduced Monty Neysmith 5000+ fans worldwide, and set the course for a full length album.       The collaboration with Monty grows throughout 2015 with more studio sessions and gigs accross the USA at Fistful Of Ska (Iowa), Denver's Goosetown Tavern, Hooligan Holiday (Kansas City), and at the FCS XXX-Mas Party (Chicago). In March 2016 they tour across Texas performing in Dallas, Corpus Christi, Houston and Austin, plus a support slot with Yellowman at Omaha's Solstice Reggae Festival. By the end of 2016 the album was complete, and the band set their sights on returning Monty Neysmith to his massive fanbase across the UK/Europe 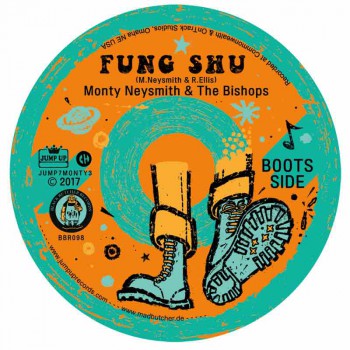